The renovations at my rental are finally coming toward an end. I’ve spent much of it being without a kitchen or a computer or much of any of my belongings really. Half of my house is still in boxes, and with full time work spare time is definitely at a minimum. Which has meant I’ve been doing little to no cooking most nights, let alone anything fancy. I’ve definitely been missing it, and missing having usable space. But we’re slowly reclaiming the house and getting everything into some semblance of order. I have some usable spaces now, and no more yellow benches and green walls — massive yay! I’m definitely going to try to spend more time in my [new — more yay!] kitchen and in turn make more time for sharing it with you guys.

Speaking of work, though, over the last few months we’ve had a number of people being shifted to new locations or moving on to other things. We’ve celebrated last days with sadness and, of course, with cake. I’m fairly sure I’m getting a ‘the cake lady’ reputation now.  A few weeks ago I made a ferrero rocher cake and had a pile of biscuit crumbs and hazelnuts that needed to be used up. The easiest thing to use a pile of biscuit crumbs on is definitely cheesecake (if not truffles), and the hazelnut definitely leant itself to another favourite: nutella. 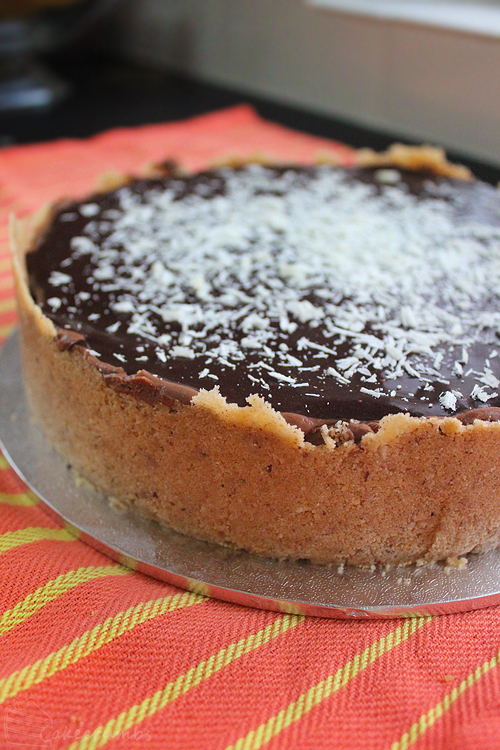 The fact that it’s endlessly simple definitely helped in the decision making process. You don’t even need to bother with gelatine for this one!

After preparing your pan you’ll wanna start with processing your biscuit crumbs, then adding enough butter to make them adhere. I’ll give you measurements in the recipe, but I didn’t measure. I was using leftovers so I had an unspecified weight to work with, but sometimes it’s better to not measure for this bit. It’s best to add the butter gradually and stop once you can press the crumbs together.

Once the mixture is pressed into your pan, you can refrigerate it and move on to the filling. If you’re a lazy butt like me you’ve probably forgotten to set the cream cheese out to let it come to room temperature. It’s best to do so, but if not make sure you beat the cream cheese and sugar really well first to make it creamy and get rid of any lumps. The heat generated by the mixer is usually enough to soften it appropriately.

Next I warmed the nutella and added it in. Don’t add in the melted chocolate yet as the cool cream cheese may cause bits of chocolate to solidify before you can mix it properly. By adding the warm nutella you can gradually increase the temperature of the mixture to ensure it all blends well.

Pour the mixture into the base and refrigerate for 4 hours, or overnight. If you’d like to, you can add some chocolate ganache on top. I had some leftovers from a cake order a few days prior and wanted to use it up, but if you’d like to make this less rich you can certainly omit it. I decorated it with a very basic smattering of shaved white chocolate.

The resultant cheesecake is fairly rich. It doesn’t taste like eating nutella right out of the jar, but the flavour is definitely there. 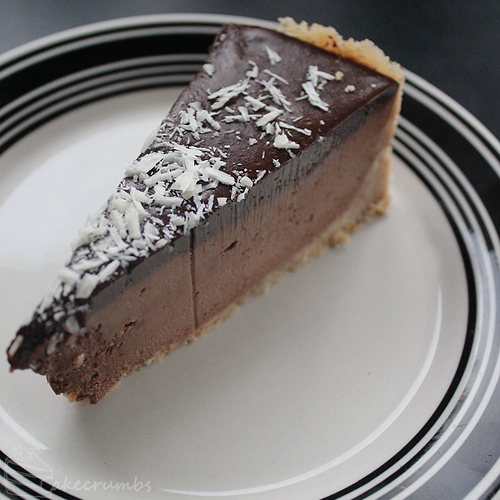 Of all the cakes I’ve taken to work, this one definitely disappeared the fastest. Normally there’s some leftovers so those who are rostered on the next day can have some, but this one was gone long before then. Towards the end of the day there was a quarter of it left, until one of the guys at work realised it was there and he’d somehow missed out on hearing about it. After demolishing one slice in what seemed like 3 bites, the rest of it quickly followed. Definitely a sign of success!

Here’s how you can make your own.