A while ago a friend of mine introduced me to the concept of chocolate avocado mousse. I had my first play with it with this mousse cake. But the moment I heard about it, this is the dessert I instantly conjured in my mind. I’ve just been waiting for the excuse to do it: a wait that’s stretched to well over a year, but the wait was certainly worth it.

I starting having a look around the net for hard-shell chocolate taco recipes, but there really wasn’t one. Most were just covered in chocolate, or were more pancakey. So I had to come up with a way to create a hand chocolate taco shell on my own. There was one obvious solution: chocolate tuiles.

I’ve steered clear of tuiles after my first attempt with them many years ago went horribly. They were sitting in my ‘Too Hard’ basket waiting for the day I became brave enough to try once more. Necessity forced this reunion.

Perhaps this recipe is more forgiving, or perhaps I’ve learnt a lot in the many years since I last tried them, but they were actually really easy.

The first thing you’re going to want to do is make yourself (or buy yourself if you’re not as stingy as me) a template. I used a sheet of acetate (one of my favourite kitchen tools) and cut three 11cm circles out of it. How large your circles are will depend on how large you want the tacos to be. Try to envision them folded over and go from there. 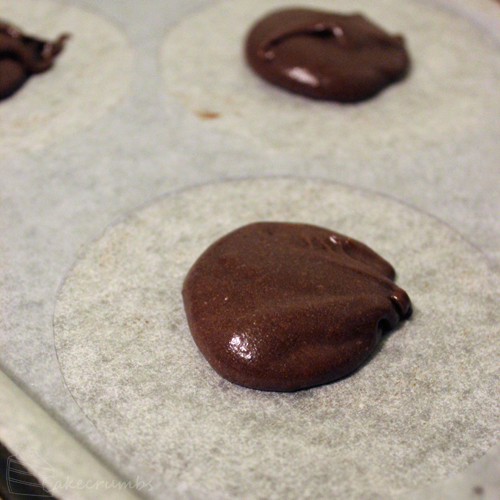 Then it’s as simple as dolloping a little mixture into the middle of them and using a palette knife (or butter knife if you don’t have one) to smooth it out. When you remove the template you’ll be left with perfectly even circles.

To shape them, I suspended a bunch of cannoli forms from my bench. You can use anything you have on hand for this, such as a thick-handled wooden spoor or other utensil. Working quickly, you need to remove the tuiles from the oven and drape them over the form to make a taco shell shape. You have no more than 10 seconds once removed from the oven before they will go hard and cannot be maneuvered. They’re obviously quite hot and you’ll probably burn your fingers a lot. It’s something I’m used to and it doesn’t bother me, but for those of you that are more sane than I am you can avoid it by using something like rubber cleaning gloves to protect your digits. 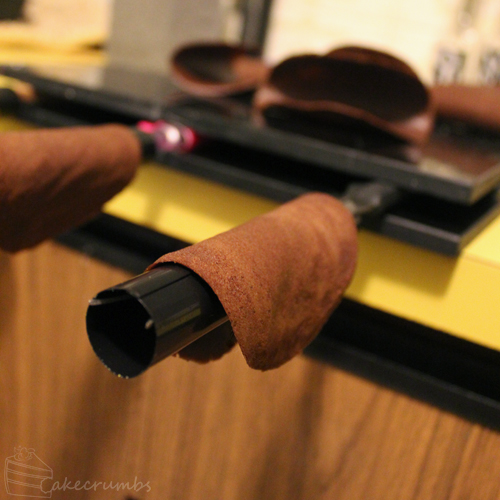 Once they’re completely cool, which is a matter of minutes, they’re ready to be filled. The tuiles will keep for a few days in an air-tight container so they can be made in advance. 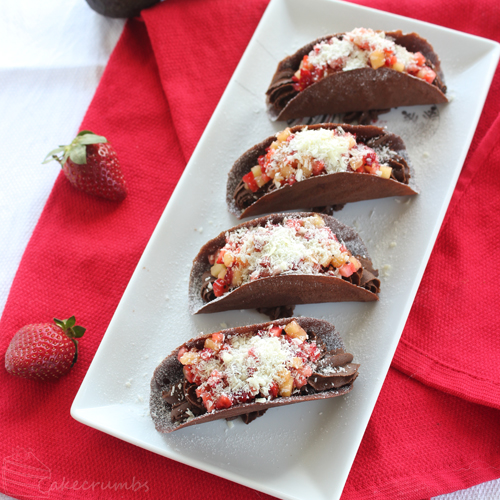 I filled them with chocolate avocado mousse, and topped it with diced strawberries and golden kiwis. In place of cheese I sprinkled some grated white chocolate. 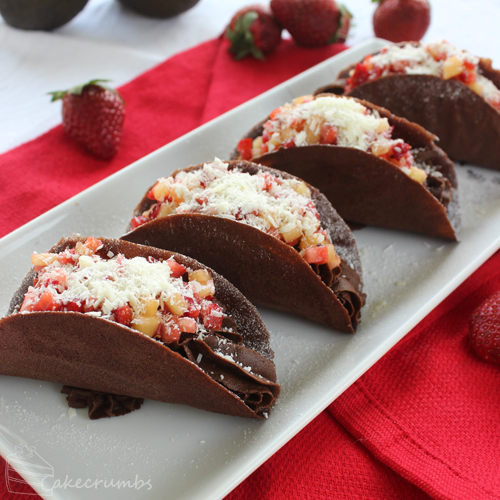 The chocolate mousse is really light, fluffy and totally devoid of avocado flavour. You try searching for it on your palate, expecting to taste some kind of savoury, but it’s really hard to pick it. It’s especially difficult without knowing what’s in it. It’s a great dairy-free alternative. It also requires no gelatine to set, making it great for piping. The mousse can be made well in advance and piped into the shells just before serving.

Of course you can opt for a less-involved dessert option. The tuiles go great with ice cream and will likely do equally well with most other store-bought creamy desserts. Here I simply served it with some raspberry swirl ice cream and sliced strawberries. Make it as simple or as complicated as you want. The tuiles are so delicious and versatile that they’ll fit most any fillings you come up with.

Pipe the mousse into the tuiles just before serving to avoid moistening the tuiles. Top with diced fruit and chocolate and serve immediately.