Wow. It did not take me long to fall off the band wagon with this one. Lately, finding time to cook anything that isn't 2-minute noodles is an achievement within itself.

But here's one to fire this challenge up again. This one comes from Mary-Lou Arnold’s “The All Occasion Chicken Cookbook”.

A move from the sweet and to the savory: though you probably won't be surprised to hear that it involves pastry.

I mean, how many times have you heard me say I love pastry?

So I started off with my chicken leggies, and because I am somewhat of a perfectionist (though by the shoddy job you can see the quality of my knives had me give up before perfection was attained) I French trimmed the legs. You, of course, don;t have to do this, but remove as much of the skin as you can, at least. It is okay to sever it at the knuckle, and the picture of the finished product in the recipe book indicates that they left this last bit of skin on, too. But your meat should look something like this:

Now, I somewhat doubted the ability of the legs to cook in 35 minutes. After all, following in the footsteps of my Sunday Roast King of a father, whenever he cooks chicken legs he does so for 45 minutes on each side in a 180 degree oven (and even then it's slightly pink towards the bone). I was prepared to put these guys back if needed.

What I found was chicken meat that was perfectly cooked through. The chicken was lovely and tender, and the taste was divine. And besides, PASTRY! I doubled up on the pastry (2 sheets instead of 1) and so my chicken might have even done with 2-3 minutes less in the oven.

I served it with honey roasted veggies, and I think that even if I hadn't have been eating naught but noodles lately, I still would have thought it was the yummiest meal I'd had in a while (I mean… it had pastry, it was born to win). 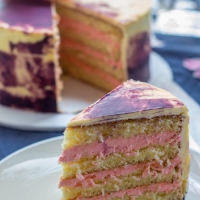