It's been a while since I've been able to participate in the Daring Bakers' Challenged for one reason or another. In fact, I think this might be my first challenge of the year. And what a challenge to jump back in on! This month, Korena of Korena in the Kitchen was our May Daring Bakers’ host and she delighted us with this beautiful Swedish Prinsesstårta!

One of my favourite things about the Daring Bakers' challenges is getting to try things you've never head of before. The Prinsesstårta was one of those things. Brand new, but my oh my it sounded heavenly. Sponge cake, custard, jam and whipped cream — let me at it!

When I described the challenge to my boyfriend, he said he thought the cake might be an appropriate treat for his dad's birthday cake.

Traditionally, the Prinsesstårta is green, and as much I loved the traditional colouring and had originally wanted to stick with it, I felt the occasion called for a more muted, elegant colour set. So I coloured the marzipan brown and opted for white roses with a pink centre, rather than the bright pink. IO adorned it with a green ribbon to hark back to the traditional version.

I tried to get a bit more realism in the roses this time, despite still lacking the veiners to get the proper texture. I used piping gel to create little dew droplets on the flowers and the leaves. when I took the cake over to my partner’s place, a few people pointed out the little droplets. It’s wonderful when you add tiny, almost insignificant details and they get noticed.

Rather than the single rose usually adoring the cake, I added a couple of little rosebuds around the sides.

I was going to go with realistic leaves, too, but as I was colouring the fondant I decided to stop half way and use the interesting marbled patterns that had formed in it.

And then to the top, I piped some royal icing decorations. They turned out a little haphazard since I didn't really know what I was going for.

But considering how terrible I am at piping, and how disastrous previous attempts have been, it was nice to get a little control over the medium. The trick is all in getting the right consistency. It made such a difference, to the point I was able to make such teeny dots.

But inside is where the party was at. The sponge was so dellicate and soft my usual string layering technique threatened to crumble it to pieces. I whipped out the serrated knife for the layering cause this baby is the lightest, fluffiest sponge you'll ever see. The first two layers are filled with jam and custard. The next two are filled with custard and whipped cream: the latter part is built to give that dome shape.

The cake reminded me of those beautiful classic sponges you're used to, just arranged differently. It was definitely a lovely experience and everyone loved it.

This cake is best eaten on the day it is made. If you're planning this for an occasion you can make it the day before (allowing time for the flavours to mature makes for a great tasting cake), but try to cover it with the marzipan the day of consumption. Rolled icing will go limp in the fridge, and likely sweat when removed from the fridge (especially if it’s not winter like it is here – our cold weather made it a little more forgiving). If you're concerned about aesthetics, you'll want to cover it as close to the time of serving as possible.

Here is the recipe adapted from Korena: 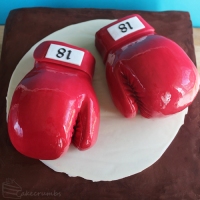