I had a little extra time for baking last week, so I decided to hit up the next couple of items on my to-bake list. These three cupcakes are the next in the Majora's Mask set I'm doing.

First we have the Postman's Hat.

This hat is received after relieving the Postman from his duties. He's a strict man whose life revolves around sticking to his schedule. He won't flee the town even though the moon is about to crash into it because it's not on his schedule. Link gives him a letter to deliver to the wife of the mayor who subsequently orders the postman to flee. He gives the Postman's Hat to Link as he passes on all his responsibilities to him.

It took me a while to decide exactly how to portray the hat. The item on the subscreen, the hat as it looks on the postman, and how it is on the official artwork is different. I ended up going with the artwork version of it – it more closely resembles later versions (eg. Twilight Princess) of the hat, which I quite prefer. The number of bunnies on the hat also changes. I opted to go for just the one on the front of the hat, as I thought all three could look cluttered.

Next up is the All-Night Mask.

Definitely one of the creepier masks in the game. Though I don't think I imaged to get all the creepy vibes into the cupcake. This mask enables Link to stay awake long enough to endure the stories told by Anju's Grandmother.

The design of the mask extends beyind the face: around the back of the head, under the chin and over the ears. I decided to stay just with the face portion of the mask. I used a skin tone for covering the cupcake, then cut the design out of navy fondant.

Last up is the Blast Mask.

This is one of my favourite masks. The mask is received when you save the old lady from the Bomb Shop from a thief who attacks her. He steals her sack of bombs, leaving you with two options: you can either sut the sack from him, saving the old lady's stock. Or you can shoot the bag with a weapon, blowing up the bombs and the thief in the process. The second options gives you no reward, but it's hilarious and unexpected the first time.

This mask is packed with gunpowder and emits an eplosion when detonated. But given that the explodion is coming from your face, you take damage, too. I've been known to run around Termina blowing Link's head off just for the fun of it. It's especially fun if you're standing near the giant bell outside the inn. Good times.

This is the most simple design of any mask, though it did give me some practise in shaping a perfect dome of buttercream and fondant.

Here's a closeup of the skull design. 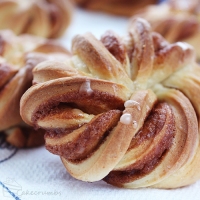