The end of June is approaching, meaning it’s time to share another Daring Bakers’ challenge!

Rachael from pizzarossa was our lovely June 2013 Daring Bakers’ host and she had us whipping up delicious pies in our kitchens. Cream pies, fruit pies, chocolate pies, even crack pies! There’s nothing like pie.

Pies are something that I love but get really easily intimidated out of in the kitchen. It’s more to do with the crust than anything. When I first started baking I attempted a number of pies, and they were largely hit and miss. Mostly miss, for when I tried unmoulding them from the tin they would either stick or snap or crumble or all of the above. So I ran away from pies. This challenge was a good way for me to test the waters again and see how I’d go now that I have many more kitchen hours under my belt.

There were four pies on offer. I went from saying I’d do one to taking on three of them!

It began when I told Cameron it was pie month and said he had to choose a pie. Ha. A pie. We both wanted to try different ones and both had different ‘top picks’ out of the lot. He was driven by his tummy, and I was driven by aesthetics. So I resolved to bake both of our top choices and the one we both wanted in common.

Beginning with our common ground was the Chocolate and Caramel Tart. This was definitely a tummy driven one on both our parts and we both wanted to try this. I mean, how can you say no to chocolate and caramel? We sure couldn’t.

The really awesome thing about this challenge was that all three pies required really different techniques. This one began with an egg yolk mixture and a crumbed flour and butter. I do confess to cheating here. I inwardly groan any time I see a recipe that asks you to rub the butter into the flour. So I used a food processor and gently pulsed the butter and flour together until it was just combined and resembled fine breadcrumbs. It saves so much time. Once you have your flour ready it’s time to get your hands really dirty and start working the egg mixture into the flour.

The dough needs to be worked really gently to not develop the gluten in the flour too much. You want it to just come together, then leave it be. This dough doesn’t need to rest in between stages, so you can whack it straight into the tart case. It has to be blind baked, which gave me a use to get out my sadly neglected ceramic pie weights. They’re really cheap and you can find them in just about any supermarket or homeware store, but if you can’t something like rice works just as well. 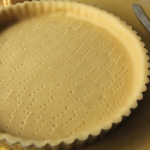 Next comes the delicious caramel. This part was a familiar process. You simply make some toffee from sugar, then add some warmed cream so it stays nice and gooey when it cools. I added a little salt to the caramel because I prefer salted caramel when ti’s accompanied with something else sweet. After that you need to add the chocolate mousse layer without disturbing the toffee. The easiest way to gently pour liquids onto each other I’ve found is to use the back of a spoon. I transferred the mixture to a jug and poured it over the back of a massive spoon so it wouldn’t dig a tunnel into my toffee. It worked pretty well.

After a little time in the oven it will be ready to  devour. Well, once you let it cool that is. I used my favourite stencil and dusted a little icing sugar over the top. 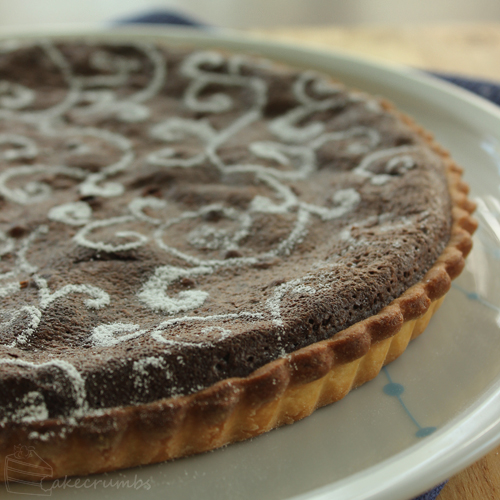 For someone used to pie failure I was certainly surprised with the result. The pastry was perfect: short, crumbly and light. The toffee added that little bit of bitterness to counter the sweetness of the chocolate mousse. And the mousse was just delicious. Light, chocolatey, rich – everything you could ask for. It’s quite the rich tart so you’re gonna want a relatively small slice. That or a huge appetite! 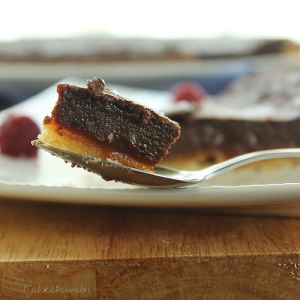 I ended up with some leftover dough and mousse so I popped it in some mini tart pans, reduced the baking time and repeated the process sans the caramel. In my effort to use it all up I over-filled the cases and had some leakage so I ended up with mousse inside the pastry shell inside the mousse. Pieception. It’s definitely better with the caramel, but I wouldn’t say no to this version either. 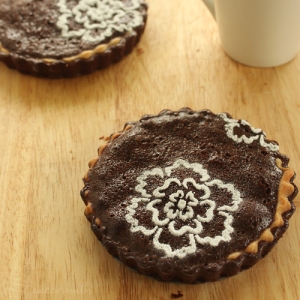 Next up came Cameron’s first choice: the Crack Pie. He read about it and loved the sound of it. All I saw was an ugly pie and I wanted to bake something pretty. He really wanted it, though, and after hearing all the rave reviews from other bakers in the Daring Bakers forum I finally caved in. It can’t always be about the pretty things. Sometimes it has to be all about the tasty things, right? 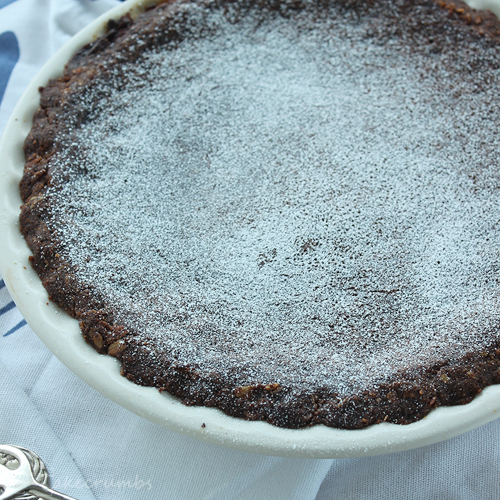 This one is a very different process to the other two. It begins with making a giant oatmeal cookie! One you will have to resist the urge to eat. It smells so good. 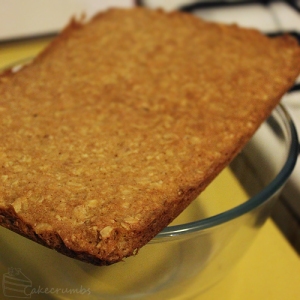 Once it’s baked and cooled, you crumble it up and make the pie base out of it. Quite similar to making a cheesecake base really.

As well as embracing three separate pie making techniques, I wanted to give them three very different looks, so I decided to use an array of different pie and tart dishes that have been neglected in my fear of pie. Rather than making them all in tart pans and having them all free-standing, I wanted to give some a more rustic look. 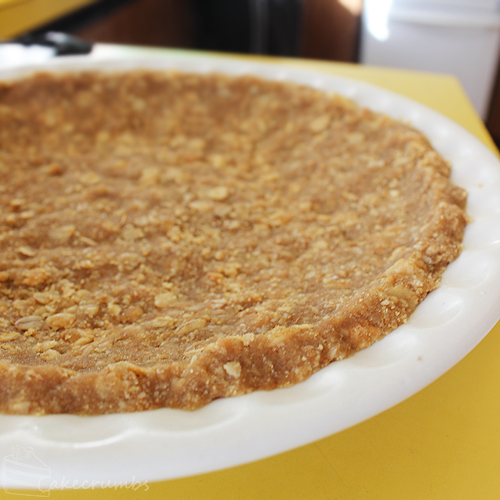 Next is just a simple matter of making your filling and baking it. The mixture will rise while it’s baking, then sink when you remove it from the oven to cool. Don’t panic, it’s completely normal for it to sink. 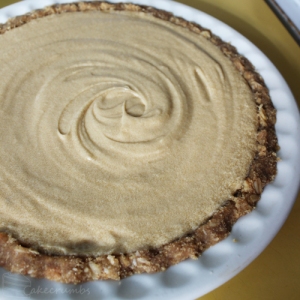 Once it’s cool, you can give it a smattering of icing sugar to brighten it up a bit.

Then, I discovered because I do not read recipes ahead, you’re supposed to let it cool overnight. Heh. Well, we needed it for dessert than night so there went the rules. I let it cool enough to cut then dug right in. I suspect my pie was slightly undercooked in the middle. I’d been baking it longer than the recipe advised and it was getting quite brown so I decided to remove it. Even after the rest of it cooled overnight my centre was a bit more gooey than I suspect it is supposed to be. However, since I’ve never tried a crack pie before I have no idea what it’s supposed to look like. None of us cared much, though, because it was so good.

A lot of people in the Daring Bakers forum said it tasted like pecan pie without the pecans. I haven’t had pecan pie but it must be true because Cameron said the same thing. I just knew it was yum. And that my ugly-pie-snobbery was oh so very bad, because this just might have been my favourite of the lot. From the oat cookie crust to the sweet centre and the crispy top, it was hard to get enough of this dish. As well as being the most delicious, it is the least technical, the quickest and the easiest of the lot.

Last of all was my first preference: the Crostata di Marmellata. I wanted to bake this one because it was pretty. And red. I love red. And there were strawberries. Strawberries!

Strabwrries are painfully expensive here at the moment. Being the middle of winter, it’s to be expected. But after the summer of abundance we’ve just had where I was scoring kilos of this amazing fruit for a pittance, paying $5 a punnet is hard to swallow. But I so wanted to try this pie anyway, so I stuck with the strawberry version.

Not gonna lie, when it came time to boil them into a jam I was sorely tempted to just eat them instead.

The dough for this recipe requires a lot of resting, so it’s a good idea to get onto this first. The dough has to be handled even more gently than the first and should only be mixed until the flour is just combined into it. It’s not worked or kneaded at all and has to get straight into the fridge for an hour. Then, once it’s in the pie dish it has to rest in the fridge once more.

While the pastry is having a nap in the fridge, it’s a great time to begin the filling. To make the marmellata, you place the strawberries, lemon juice and witer in a pot and gently cook until the strawberries release all their juice and are soft to the touch. Then bring it up to a rolling boil and cook until set. Pretty simple stuff. If you don’t have the time to do it all in one day, you can make it in advance and just reheat it when you need it. 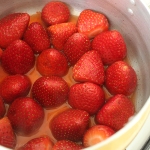 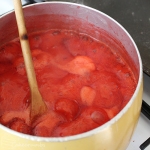 Once your base is baked and cooled, you can add the filling and adorn it with a lattice. If you’ve made a successfully light dough you might find it hard to make a complex lattice. Mine was really light and fragile and kept breaking when I tried to be fancy, so I ended up keeping it simple. You can make the lattice as big or small as you like. I like thin, dainty lattices personally.

I baked a couple of pastry strawberries on top just because I couldn’t resist adorning it a little more.

The pie cuts really nicely and looks a treat. But how it looks is only half as lovely as it tastes. It’s a lot sweeter than I thought it might be, but packed full of fresh flavour. I served it with a little cream, for what else could go better with strawberry jam? The previous two pies make for luscious desserts, whereas this one is better suited to a nice afternoon tea with a warm drink and good company. 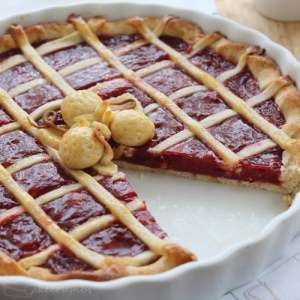 If you’d like to bake either of these three pies, here’s how you do it. Recipe are adapted from those given to us by Rachael:

Leave a Reply to Crumbs of Love Cancel reply