Cinnamon is very not so secretly one of my favourite things to cook with. If I can find an excuse to put cinnamon in a thing, there will be cinnamon in the thing. Be it a bowl of yoghurt or just a hot chocolate, a little cinnamon turns it into the most exciting thing in the world.

So it’s no surprise that the simple cinnamon bun is high on my list of loves. Every now and then, I like to try something new with my standard recipe to change it up a little. 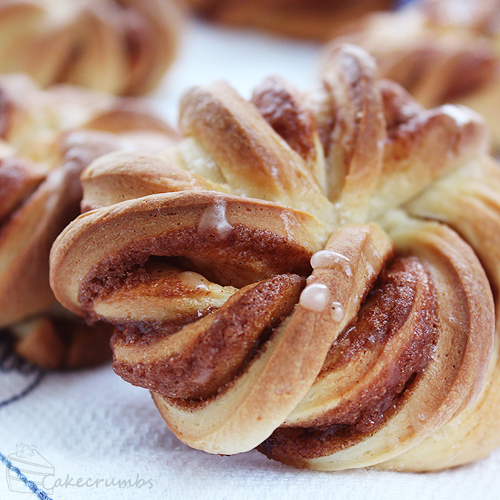 This method puts a whole lot of twists on the traditional cinnamon bun.

The most important part with yeast breads is to get the temperature right. This recipe skips the proofing stage. If you buy individual sachets of yeast that are within the use by date, it should be alive straight out of the packet and not require any proofing. If you’re concerned that your yeast isn’t fresh, however, by all means proof it first.

When you’re not proofing, it’s extra important to get this first step right. Yeast is happy at about 27°C – 32°C. When warming your sour cream and milk, you can use a thermometer if you want to be extra pedantic, but I just use the wrist test. I test a couple of drops of the liquid on the inside of my wrist. If it feels warm but doesn’t burn or hurt or cause any discomfort, we’re good to go.

You then make a well in the centre of your flour and yeast mixture, add the wet ingredients and start working it in. You’ll know you’ve got it right straight away from the smell the yeast gives off as it comes into contact with the warm liquid.

Once you’ve worked it all in you can turn it onto your work surface and get ready to pretty it up.

After a lot of kneading, you’ll be left with a soft, elastic hunk of dough. Now is when you’ll really put your dough to the test by putting it in a bowl, covering it with a blanket and letting it have a nap.

If you return to find your dough has doubled in size, congratulations: your yeast babies are alive and well!

Once you know your dough is good it’s really hard to go wrong from here. I split the dough into two lots, then cut them into even sections.

Now the fun begins! Roll out all your little pieces of dough into long oval-ish shapes. I’m so not pretty about the rolling out part. If it’s flat, thin and long, it’s fine. Spread a bit of the cinnamon mixture onto it, then, leaving one end intact, cut it into thin strips lengthways.

Begin from the end you left in tact and start rolling it up on and angle until you have a stripey sausage, pinching the ends together to secure. 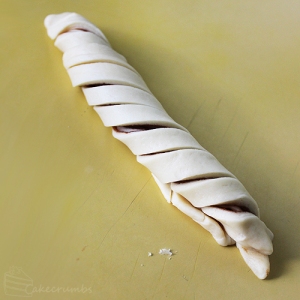 Then tie the knot in the dough: cross the two ends over one another, then wrap the end at the front over the side and up and under the back to secure.

Another nap, followed by a short stint in the oven and your house will smell of fresh bread and cinnamon. 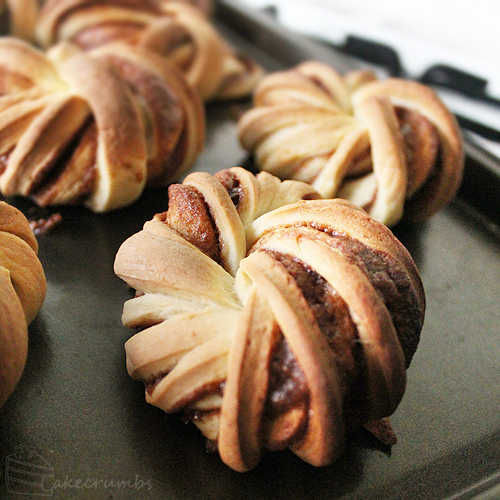 How you glaze them is up to you. I, personally, don’t find the white glaze the usually adorns cinnamon buns that appealing. It obscures the prettiness of the buns and too much just makes them overbearingly sweet to me. I drizzled over a little clearer glaze than normal so you can still see all the intricate lines in the knots. 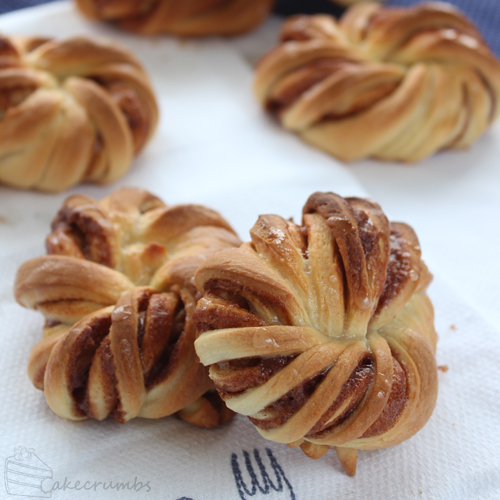 How thin you cut the strips in the beginning will affect the overall look of the final bun, so keep in mind what look you’re after in the early stages. I liked making them thin so it makes the knots look really intricate and multi-layered. 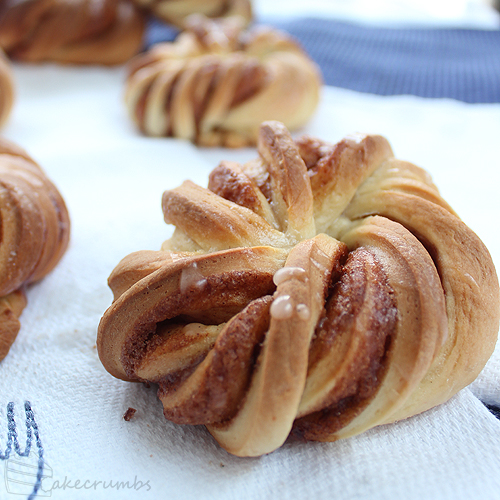 What results is a really light and fluffy but, filled with swirls of cinnamon. The outside is really crisp and crunchy, contrasting with the softness inside.

Here’s how you can make your own batch of twisted cinnamon knots.