Depending on which corner of the world you call home, Catching Fire is either out or about to be out. Here in Aus, it came out today. I have to wait until tomorrow night to see it. If you’re wondering if I am going moderately insane having to wait an extra day, then yes. Yes I am. I am so excited I am quite literally bouncing. A lot.

To celebrate, I decided to make some Catching Fire themed cupcakes. Not that I need more sugar in by vicinity right now, but I couldn’t resist.

Having only seen the trailer (more times than I am going to admit) I thought I’d go for cupcakes that were symbolic of certain characters, rather than trying to depict actual objects from the movies as I’ve done in the past. I also wanted to do it in the least spoiler-ey way possible for those of you who haven’t read the books. So all these cupcakes mostly depict things we’ve seen in the trailers already.

I started, of course, with the Girl on Fire herself, Katniss. When it came to picking a pivotal scene for her, there were many that I had in mind, but they were way too spoiler-ey. so I went for something we’ve kind seen a bit of so far: her wedding dress transformation.

We’ve seen a lot of Katniss’ wedding dress already, and we get a glimpse of her fiery transformation into (without giving anything away!) something else during her interview with Ceaser.

I made a whole bunch of sugar feathers and used dual-coloured buttercream to represent the fire. The structure at the top is a stylised representation of the embellishments on the dress.

Moving on to Peeta, known also as The Boy with The Bread. I had a bit of trouble deciding what to use for his symbol. The bread thing is fitting for the first book/movie, but is less fitting for Catching Fire. In the end I decided on the locket and pearl that he gives to Katniss in the arena. 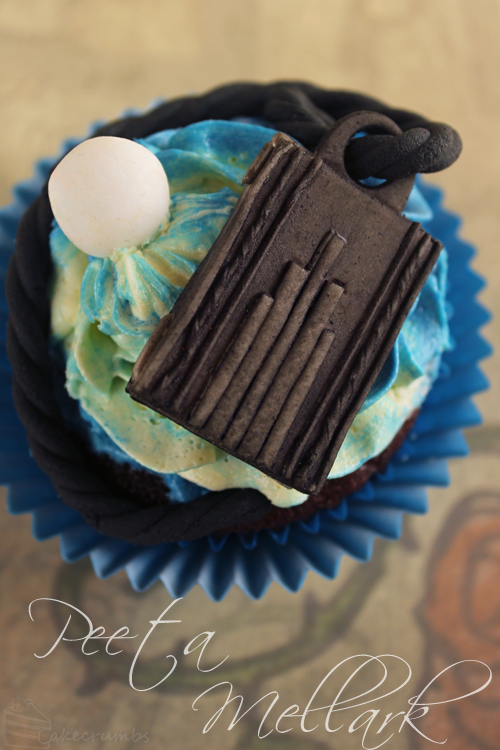 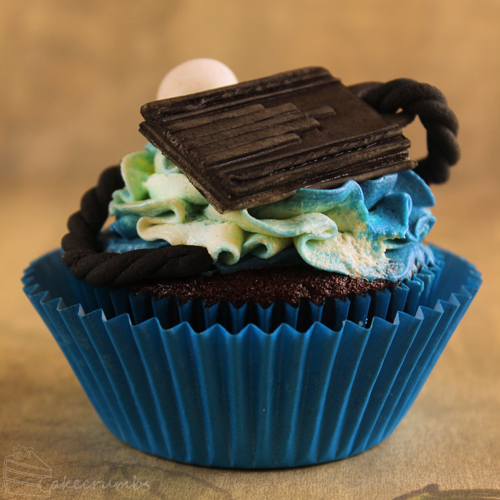 Next comes Katniss’s and Peeta’s escort, Effie Trinket. Effie has so many wonderful, eccentric costumes that would have been fun to make, but I chose the outfit she’s wearing at the reaping. I think this scene shows such a moment of character development. From the woman who during the ceremony the year before was concerned about nothing but trying to secure a promotion to a better district, to the woman who is visibly distraught by what is happening before her.

Effie’s reaping outfit is comprised of monarch butterflies. She’s wearing a light blonge wig with a butterfly fascinator. I used light yellow buttercream and piped tiny swirls to represent her curly wig. The butterfly is made from fondant and painted with lustre dust and food dye.

Finnick is a new character in this installment of the trilogy. He’s one of the other competitors in the arena. I’m not going to say anything about what his relationship with the others develops into just yet, but he’s going to play an important role. When Katniss first encounters him at the Remake Centre before the opening ceremony, however, she takes a disliking to him. He’s incredibly flirtatious and Katniss finds him egotistical. It’s his opening line to Katniss that has become perhaps his trademark line: “Want a sugar cube?” 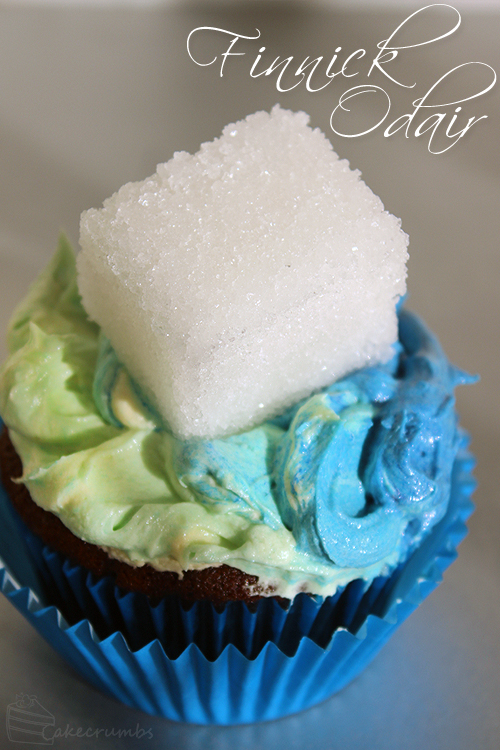 In the interests of staying completely DIY I made a sugar cube for the top. I made sea-coloured waves with the buttercream, as Finnick comes from District 4 (the fishing district) and has close associations with water.

Last in the character line up is the formidable President Snow. We’re going to get to see a lot more of Snow this time than we did in the last movie (assuming they haven’t changed the plot too much of course) and I can’t wait! Snow chooses the white rose as his symbol. It’s a mark of his obsession with perfection, but it serves a secondary purpose. Snow always wears a genetically engineered white rose in his lapel to mask the scent of blood on his breath. It’s apparently not very successful as Katniss remarks that he smells of fake roses and blood.

I made the rose out of fondant and used coloured piping gel for the drops of blood. In the buttercream I put faint streaks of red to represent the blood as well.

The last cupcake features the Catching Fire mockingjay. There’s a number of differences between the mockingjay logo used for the movie and the one the graces the book cover. The first is that it’s flipped horizontally, the second is that it has no feet or legs. When I made the Mockingjay Cupcakes I had so much trouble making the feet and getting them to stay on that I wanted to leave them out altogether. I persisted, knowing anyone who was in the fandom would notice the omission. Then the movies comes along and leaves them out anyway. Doh.

I deliberated over what colour to make it for a while. The mockingjay pin is gold, the Catching Fire mockingjay is brown. The logo for the movie is supposed to be a direct transformation from the first to the second, but it doesn’t look very gold. But that also might just be because it’s reflecting the fire. Decisions decision. In the end I made it bronze, rather than gold, for a happy medium between the two.