By way of cake, a lot of my loves and obsessions end up making their way onto the blog. One that has yet to much such an appearance is my fierce love of football. And by football I mean Australian Rules Football, the only real football. Just ask any Melbournite. I’ve always been a fanatical Carlton supporter and am now also a Carlton member. I’m not sure where my love of the Navy Blues came from, as no one in my immediate family follows them. My dad’s a rabid Essendon supporter who tried but failed to get me on side, and most everyone else was just apathetic. I don’t remember ever making a decisions to follow them, it was always just the natural conclusion. When I got older and saw my birth certificate for the first time I discovered I even get to utter the ‘born and bred’ saying with extra gusto as I was actually born in Carlton, so perhaps it’s always been innate. AFL is my religion, and Carlton Football Club are my Gods. 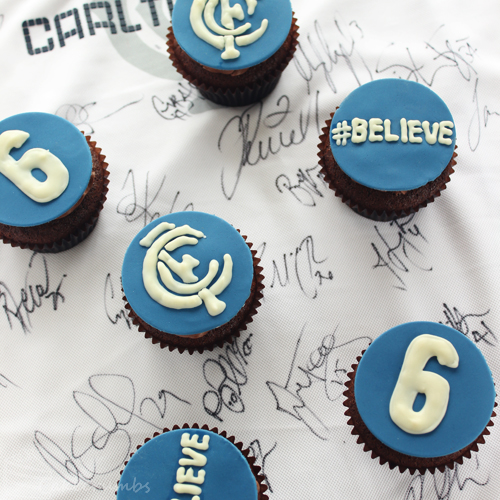 It’s September and September here means footy finals fever in Melbourne. It’s been a pretty exciting finals series thus far. Even so for my team. We’ve been fairly average and frustratingly inconsistent all year. We’ll have quarters where we look as though no team in the contest would stand a chance against us, then follow it up with a quarter that brings us completely undone. We won and lost by small margins, and wins and losses were often a matter of a few seconds or a few centimeters difference. We were set to just miss the finals this year, but when a drug cheating scandal saw our historic rivals Essendon scrapped from the finals this year, we got a second chance.