When we’re doing the grocery shopping, we’ll inevitable turn down the aisle with all the jellies. Next to all the various types of jellies is a shelf full of box-mix chilled desserts, amongst them a packet for jelly slice. Without fail, every single time Cameron will ‘notice it’ and mumble some variation of ‘mmm, jelly slice’. This is always a not-so-subtle hint towards me that next time I’m thinking of making a dessert, I should make jelly slice. Or even if I’m not thinking of making dessert, I should make jelly slice. Or basically that jelly slice should spontaneously happen pronto. So I decided to surprise him with a batch one weekend.

Jelly slice isn’t something that was a part of my childhood, or even adulthood, but it was very much a part of Cam’s. It was a dessert his Oma used to make for them all, and has continued on to be one of his favourite things. I was yet to try it for myself, so it seemed like as good a time as any to see what all the fuss was about.

Jelly slice is a tri-layered Australian dessert. It consists of a biscuit base, a cream, custard or cheesecake centre, and a layer of jelly on top. It’s delicious and incredibly simple to make.

END_OF_DOCUMENT_TOKEN_TO_BE_REPLACED

Pailleté feuilletine is a common ingredient in a lot of chef-ey recipes. All it is is crushed up pieces of crêpes dentelles, or lacey crêpes. The crêpes themselves are more like a tuile or a biscuit than the pancake-type dessert I imagine when I hear ‘crêpes’. These incredibly thin layers of sweet, caremelised crêpe are rolled up into a cigar shape, either with an opening large enough for a filling or no. 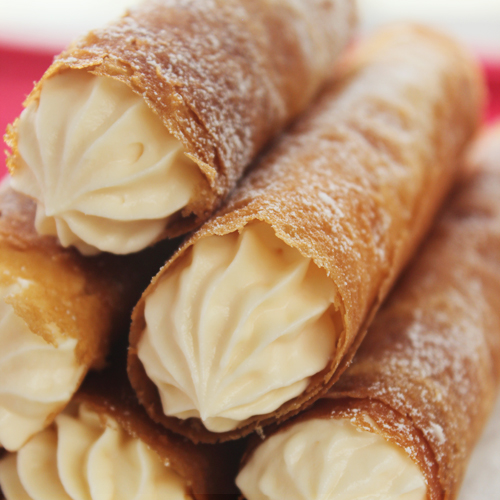 I needed pailleté feuilletine for a cake I’m making soon, a cake with a massive list of obscure ingredients. I’ve resorted to making as many of the ingredients on my list as I can, both to cut costs and because it’s good fun.

In many places, crêpes dentelles, or the crushed form of them, are not difficult to find. But here in Australia, they are fairly obscure. It’s an item found almost exclusively in specialty food shops and is certainly not cheap for what you get. Making it at home was not only preferable for my hip pocket, but it produces a beautiful dessert along the way.

END_OF_DOCUMENT_TOKEN_TO_BE_REPLACED

On a fairly regular basis I’ll ask my partner for ideas of things to make for him. I tend to ask hoping for some super complex brilliant idea of a dessert he’s wanted for ages but has been some unattainable challenge of epic proportions. But usually, he just wants custard. So I tend to ignore that and make something else anyway. I guess what I’m really asking is, “What do you want that I want you to want?”

Ever since we started going out and I started cooking for him and asking him for ideas he’s asked me for panna cotta. I usually put it off due to its perceived ease. 6 years later, I thought it was about time I finally obliged.

One morning before we headed off to the football I decided to whip up a quick batch of it. I kept it a surprise and wouldn’t tell him what I was making when he asked me. I was almost finished. I strained the mixture into a jug, left it to rest on the sink and turned away to find a safe place to rest the still hot pot it had cooked in. That’s when I heard it. The thud of the unattended jug falling into my sink. I turned in time to see almost the entirety of the mixture swirl down the drain.

Maybe it was trying to tell me something.

There was enough left for a small serving, so I dejectedly poured it into a mould and gave it to him for dessert. He reported that it was the best panna cotta he’d ever tasted. I don’t know if that made it better or worse.

Take two happened a couple of weeks ago. Delicious, but it didn’t end up perfect and pretty like I wanted. So this weekend I embarked on take three. That’s what I get for sneering at this simple dessert. And I suppose the triple batch of panna cotta in the last month is exactly what Cam deserved for waiting so long.

But don’t be fooled by my dose of karma. This is an incredibly simple dessert, and the result is ever so rewarding.